The first “EV” refers to everyone, and the primary purpose of our brand is to serve all the people.

LED refers to “Light”, meaning “light, hope and warmth”. Hopefully, our industry not only lights up real life but also illuminates the road ahead of everyone and dissipates all negative energy.

The last “EV” refers to “everywhere”. The original intention of creating our brand is to wish everyone to be accompanied by light and every corner to have a beam of light that belongs to itself. It represents warmth, hope, and a beautiful expectation with infinite imagination for the future.

I am Amy. A girl who has resisted everything from the outside world since childhood. I did not like to contact children of the same age. Born with mild autism, I preferred to stay in the wardrobe alone. Only in the wardrobe could I feel safe. 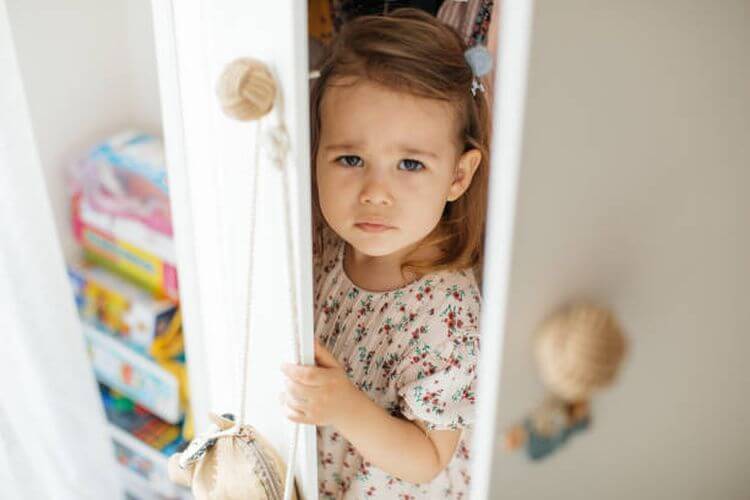 In the eyes of others, It was just a tiny dark wardrobe, but my world and my dream rested there. I liked to stay in the wardrobe and play hide-and-seek with the light penetrated from the gap of the wardrobe.

Until the sunset, The wardrobe in the loft fell into darkness again. I became more greedy for the beam of light. I thought only that beam of light belonged to me.

I tried to wrap the light in bottles, boxes and even my grandma’s cotton-padded clothes, but the light still did not stay. I began to feel sad in silence in the dark days and at night.

One day, I watched my grandma light the fire in the fireplace with a match. That night, I seemed to have got a priceless treasure. The warm firelight was like the beam of light from the crack of the wardrobe.

I secretly brought my grandmother’s matches into my wardrobe. Held my breath and drew out a match, Wiped on the matchbox. A small flame came out, faint but warm.

The beam of light came back again! I became obsessed with finding matches as a substitute for the light on cloudy and dark conditions.

There were 20 matches in that box, and matches were too expensive. I thought for a long time when the last one was left, then ignited it. Watching the match burn to the end, the light became darker and darker.

I escaped in a hurry, the fire started from the loft and spread to the whole house soon.

My grandma wrapped in a blanket and said nothing.
My parents took my grandma and me to rent a house.
Despite no word of blame, The sense of guilt haunted me.

After that, I spent more and more time in the wardrobe. My father also got into the wardrobe to enter my inner world. The small wardrobe was really crowded for my bulky father, he was half-kneeling and kept panting.

My father played the light-catching game with me. In the sunshine that penetrated into the wardrobe; he made different shapes of shadows with his hands, such as rabbits and cocks.

I was shocked!
I knew for the first time that I could play games with light like this.

One day, my father took a small lamp and went into the wardrobe. He told me this LED bulb would not become hot, and it would not burn anything.

I stared at the LED bulb in front of me. My father encouraged me to feel it.
After a long time, I bravely touched the bulb and retracted my hands like a conditioned reflex, in case of being burned.

To my surprised to find that my hands were not burned. I wrapped around the whole bulb with my little hands. The light emerged from my fingers.

They did not abandon me when I suffered from autism.
They did not criticize me too much when I made mistakes.

I was too sensitive, just like an angel with broken wings.
I was not strong enough, and would only escape in the wardrobe.

My family accepted me.
My family is the LED bulb.
It is also the beam of light that really belongs to me.

I firmly believe that there is always a beam of light that warms everyone in life!

After so many years of growth, the little bulb in my heart has never been extinguished.

In order to make more light shine on each broken wing angel and bring joy to each family, I have created the brand Evledev.

I hope to bring more light to the world based on my own experience and practical actions. And I hope that everyone and everywhere can enjoy the warmth brought by light.

I always feel guilty about incautiously burning down my grandmother’s house in childhood, and I hope it will not happen in other families. So I have positioned my brand and products on the LED.

LED is a safe light source. It not only marks a tremendous light revolution that has been restarted since Edison invented the light bulb but also an essential green technology light revolution for human beings.

The largest advantage of LED lamps is energy-saving and environmentally friendly. As a solid semiconductor device that can convert electric energy into visible light, it can directly convert electricity into light.

Evledev is a brand with warmth and love. It starts with the yearning for light, and it also carries all the experiences of an autistic girl to get out of the darkness.

After years of development, Evledev has an experienced professional R&D and design team, focusing on product development, continuous optimization, and improvement of smart products. Evledev provides a full chain of services from software development, industrial design, structural design, and packaging design with a mature development process.

Evledev’s smart products have won more than 100 design awards at home and abroad and have been awarded invention patents, utility model patents, design patents, as well as FCC, UL, CE, RoHS certifications, which are recognized and appreciated by peers and customers. At present, our products are exported to Europe, America, Japan and Korea, Brazil, the Middle East, and other parts of the world, and we have become a stable partner of many famous enterprises, such as Philips, Walmart, The Home Depot, etc.

We’re here to use our expertise, capabilities to help our customers develop and win more markets, helping to create a smart life, a smart world. 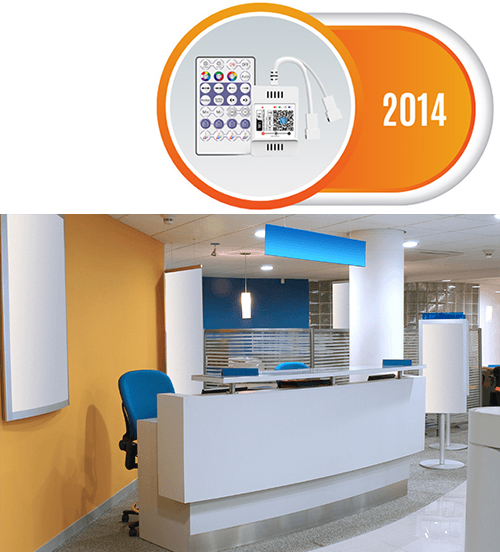 Evledev was officially established and entered the LED controller product industry. We faced many problems in the early stage of establishment, such as inconsistent knowledge level of each new employee and insufficient communication. Based on these problems, we regularly carry out some expansion activities, organize training, etc., so that employees can learn from each other. This enhances the level of business of staff and strengthens the collaboration, execution, and cohesiveness of our team to provide more professional products and services to our customers. 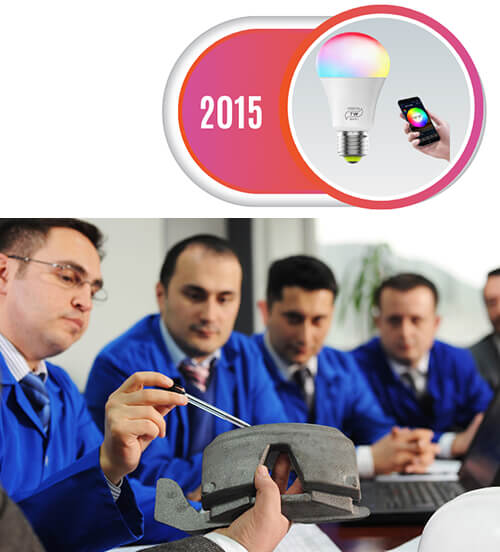 With the efforts of all team members, Evledev developed smart light bulbs, and some products obtained FCC, and UL certifications. Developing new products is not an easy task; we need to research all aspects, take smart light bulbs as an example, do market research, whether the new product meets the market demand, development cost and development time, etc. Due to the particularity of the product, smart light bulbs need to use APP control; in addition to the hardware, it is necessary to develop new APPs to cooperate with.

When developing the APP, we encountered a problem, which has been impossible to overcome in the industry. Although our team has established two years, with our determination and perseverance not to give up, persistent communication with peers and relevant professionals, we finally overcame this problem through in-depth cooperation with a scientific research team of a local university. They have the advantage in the scientific research sector, combined with our product knowledge, Solving this problem makes our APP more smooth to use and greatly increases the user attraction beyond the user’s expected experience level. 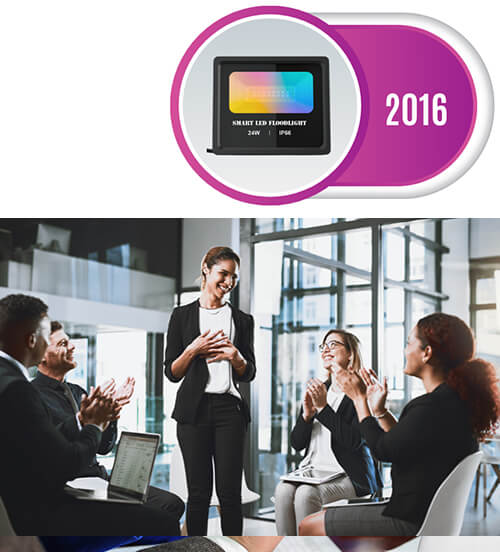 Since the founding of Evledev, we had been investing our resources in the R&D department, understanding that only a high quality product is the foundation of a company. Evledev has been growing in a fiercely competitive market, building products with technology, testing the market with products, and meeting consumer needs. Our products are widely recognized and trusted by customers, some of whom find us through OEM products. This is a recognition of Evledev and gives us more confidence to take a step forward. This year, we set up an International Marketing Department, focusing on the development of foreign markets.

Evledev successfully developed mini LED controller, and achieved a great response in the industry, improving the product’s market share. Meanwhile, We are honored to be recognized by PHILIPS and OEM the smart LED bulb category products for them. 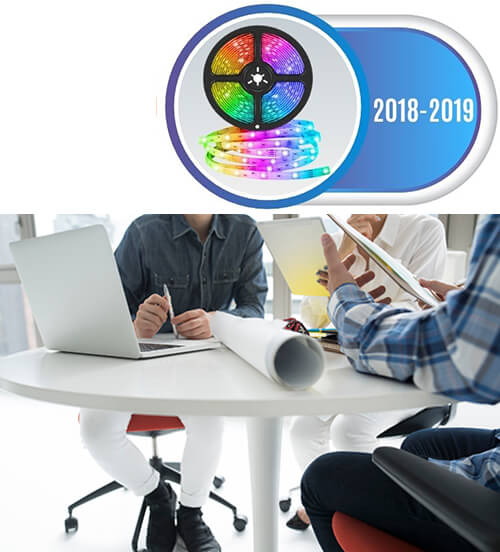 With the constant development of science and technology, the 5G era was coming. Evledev confronts what is both a great challenge and a great opportunity. Under the cooperation of various departments, according to market changes, quickly adjust the direction of the product, turn the focus of R & D to 5G smart home products. We are constantly investing in product development, factory automation construction. 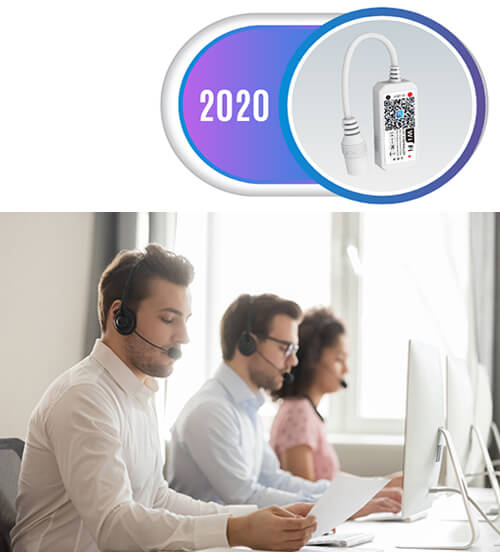 At the beginning of the Coronavirus pandemic, due to the impact of the measures of the government, the factory operations were seriously affected. We quickly launched the emergency plan and were the first to communicate and explain the situation to our customers, suppliers, and employees. Such as the timing of the factory’s return to work, capacity efficiency, logistics, etc. With the understanding and support of our customers, suppliers, and employees, we reorganized our production schedule to ensure the stability of our supply chain.

The occurrence of the epidemic is the test of the competitiveness, strength, and strain capacity of a company. We support each other with our customers, listen to the customer’s concerns, and are closer than ever to each other. 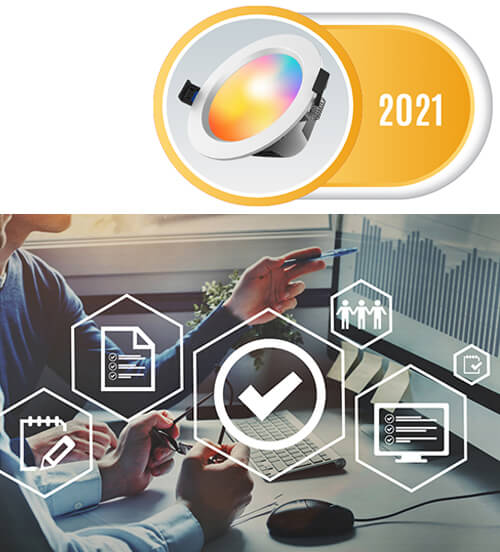 The epidemic continued, and all companies faced problems such as raw materials skyrocketing, high shipping costs, and chip shortages. Since our products are smart home products, it is very dependent on the supply of chips, our chip’s constant stock reserves have more than two million pieces, so the problem of chip shortage is temporarily alleviated.